She Rules with Grace and Wisdom 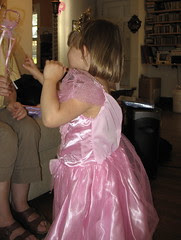 Thanks, everyone for the birthday wishes for Curious Girl. We've had a ball with the Birthday Festival, although I must confess that the excitement of turning 4 was a little overwhelming for her: she woke up so very early on her birthday, and had trouble staying asleep, and was just generally vibrating with excitement about being 4. "I'm the birthday girl so I get to choose first," she would say. "I'm four. I can do X myself now." She's just so proud of herself for being four, and also a little nervous about what it means. She hinted to Politica the other day that being four means playing different games, and I think there's some anxiety about schoolbuses lurking. But there's also much birthday joy, and that's been fun to see. Thanks to so many of you for sharing the fun!

The birthday festival included several rounds of painting clay flowerpots and then planting annuals in them (we had 3 events where this was the featured craft). Politica now thinks all clay pots should be painted. They do look cute, and they're a fun party favor (much as CG loves the bags of crap that are frequently distributed at parties, we wanted to have party favors that were a little more useful: the pot can be reused, and the plant is lovely. We try to model not-making-lots-of-trash with our gift practices. We had our craft, we went inside and ate birthday brownies (Moosewood fudge brownies are divine, really.) Very simple, and moms and kids all had fun. CG was very proud of herself that she didn't cry as the party ended (although she was looking a little sad. "All parties end, honey, " Politica told her. "Some parties don't!" CG opined. Yes, but those are not the kind of parties we want her attending.

We have also discovered that "Don't Break the Ice" is a super fun four-year-old game. One of CG's friends--we had our first friends party, with three of her friends from school--gave it to her, and the girls all loved it. It took over the party, and that was fine with us. One of our friends gave CG the fabulous dress-up outfit you see above. It includes a sceptre and tiara, and lots of ruffles. She loves it. I can't wait to hear what she says about it when we do the thank you note for that gift tomorrow. "Thank you for the wonderful money!" she wrote in one note tonight, to one of my friends whose card had included $4 for being 4.

I'm amused watching her handle this transition. "I still going to four tomorrow," she said tonight as she rolled over in her bed. On her birthday, she said "I still go to Ms. L's class?" She's trying to figure out what's the same and what's different, and I totally understand that. I'm going to have a new job title myself in the fall, and I'm having a lot of the same excitement and anxiety about the changes this will bring (which are the subject of another post, really).

And a note about our car angst: given all the funds we're using for the home renovation, we've decided we just can't swing the Prius for a 2nd car. So we've gone for the Honda Civic, and I think that will be fine. Thanks to everyone who commented on that post, too!

And welcome to people popping by from Phantom's reference to my yeasted waffles and Elizabeth's referencing of my environmental post. Had I know you all were stopping by, I'd have worked up a more essayistic post, but you're all most welcome.

Glad to hear CG had such a great birthday - and that flower pot idea is excellent!! :)

And congrats on the car choice too. I had a Civic - I drove it until it was almost 15 years old. It was stolen once, broken into twice, made more than one trip between Georgia and Massachusetts, took me through most of college and several jobs, and never balked or got less than 30 mpg. (May she rest in peace). Good choice.

I'm applauding the Honda Civic choice, too. It ain't as environmentally sexy as the Prius, but it gets great mileage. We'll probably get one as our second car when our 40 m.p.h. Saturn bites the dust.

I was about to say, "Hey, we have a Civic!" but then I stopped to ask and I'm wrong. We actually have an Accord.

Happy birthday to Curious Girl. And, since you mentioned them I had to google the recipe for Moosewood Fudge Brownies, and they're in the oven now.

Happy Birthday, CG! Sounds like a fabulous party. And the HOnda is a good choice, too.