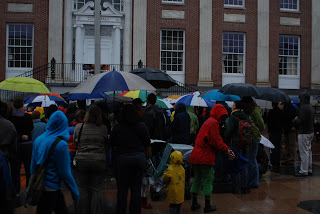 Check out Andrew Sullivan's blog for a series of posts that start "The View from Your Protest" for first-hand reports and photos from marriage equality protests around the world. It rained today in Germany--hence all the umbrellas and rain gear in the photo above--but we had over a hundred people, maybe 150 people, at a rainy little rally. It was hard to hear the speakers, but Curious Girl had a great time playing with an 11-month old puppy. The moment of silence at the end was very moving; otherwise, it was an oddly quiet gathering, just a series of speakers, no crowd involvement, no chanting or singing. But there was exhortation to get involved with our state marriage equality organization. And given that Politica and I haven't ever bothered to tell Curious Girl that we're not legally married, perhaps the quiet gathering was just as well. I don't know how to explain the odd (un)legalities of lesbian family life to her just now. I'm not afraid to tackle hard issues with her--but she's young enough to expect everyone to be kind and fair, and I just can't think of a way to explain to her that the way her own family is viewed in the eyes of the law here is profoundly unfair. As far as she knows, we're married, and that's all there is to it.

Here's the letter I've written to our governor, which I will be revising a bit to send to my state legislators, too:

We met last August when you attended the reception for new faculty at German State University. I was impressed, then, at the way you've set up a tradition of being so personally involved with German State University and pleased to see the ways in which you make it a priority to attend events like that, which allow you to make personal connections with Germans. I'm glad you value the personal as well as the policy sides of governance. Politics is ultimately personal: the choices you oversee in the executive branch affect the ways in which Germans get to live their lives.

My partner, daughter, and I relocated to Germany late last summer because of the remarkable professional opportunities German State U offered us. More important that those professional opportunities, however, were the state legal protections Germany's domestic partner legislation offered our family. In our previous state, Politica and I had no legal relationship to each other. Here, as far as the state is concerned, we are legal next of kin, and we enjoy all the legal, state-level benefits of marriage.

However, we don't enjoy all the social benefits of marriage, and we don't enjoy all the legal benefits of state marriage that would be recognized in other states. While we are grateful for what Germany offers, I hope that someday soon, I will be able to join Politica in a legal marriage. This would be important to me for several reasons: first, marriage means something in America that domestic partnership doesn't. "I got domestically partnered last summer" just doesn't have the same ring to it that "We got married!" does. Secondly, as our daughter gets older, I don't know how I'm going to explain to her that Germany doesn't think her two mothers are married in the same way that Germany thinks her aunt and uncle are married. In our extended family, there's really little difference in how our family works and how my sister's family works: we work, we love our kids, we enjoy our surroundings. Yet my sister's marriage to my brother-in-law is recognized very differently than my relationship to Politica. My nieces' family has considerably more legal stability than my daughter's, and that troubles me greatly.

Politica and I travel outside of Germany quite frequently. Were we married, an increasing number of other states would recognize that relationship. Unfortunately, our domestic partnership--and the other legal documents we carry with us, such as health care proxies, might not be recognized by officials in other states. When Lisa Pond suddenly fell ill on a cruise ship off Florida and slipped into a coma and died, hospital officials in Miami refused to let her partner of 18 years and their 3 children in to see her, saying that Florida did not recognize their family. Without the benefits of legal marriage, lesbian and gay families depend on the kindness of others to keep their families together in times of stress. It is easy for hospital administrators or other officials to ignore a gay or lesbian partner and turn instead to a sibling of parent for a decision in a moment of medical crisis or death. I hope, should something happen to me, that no one would question Politica's relationship to me. I hope, that should someone question it, my sister and parents would defer to Politica. I hope, but I can't ever be sure. A legal marriage would settle those issues.

Full marriage equality in Germany won't solve all these problems; it will take decades, doubtless, for all 50 American states to arrive at marriage equality. But marriage equality in Germany would be an important step towards that day, and it would be an important step in improving the lives of all Germans. When our daughter runs off to kindergarten in the morning, she mixes on the playground just like all the other kids. When I come to read to her class once a week, I'm just another parent volunteer. When I pay my taxes, I'd love to be just another married German paying her taxes. There's no need to create a separate legal category for some Germans. If you have the opportunity to sign a marriage bill into law, please do it. You'll be making Germany an even better place, for all of us.

That is one impressive letter. Thank you for posting it.

That is a fabulous letter. And I really believe that day is coming; I hope sooner rather than later.

That's one wedding where I'd be delighted to serve as an agent of the state!

Wow, Susan -- what a great letter. Thanks for sharing!

I hope that day is coming...and it seems like there would be a better chance in Germany than many other places.

I am completely choked up.

catch this: the pro-8 people are already threatening to recall any justice who votes to overturn prop 8. http://www.latimes.com/news/local/la-me-prop8-supreme-court19-2008nov19,0,614109.story

the cal supremes voted to take the cases. http://www.sfgate.com/cgi-bin/article.cgi?f=/c/a/2008/11/19/BAJC147QAJ.DTL today was pretty much the first time they could have voted -- so the ruling reflects the importance of the issues.

This is a fabulous letter. I have one conservative friend in particular, who voted for Prop 8, whom I'll be sharing it with. Thanks for putting into such eloquent words what I've been trying to explain all along.

oh my goodness, I've been reading your blog for a long time, but oh my I didn't realize that Germany= (that place in that picture)!
This holiday I will be eyeballing every family wondering if it is you! But I'm not creepy I swear!