Young Obama Fan, or How to Get Your Girl to Make Her Bed 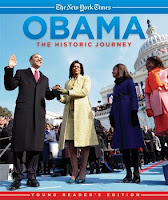 Curious Girl--like most of the rest of us--has been quite charmed by the Obama girls. While she still tells people that she tried to get her mothers to vote for Hillary, but they wouldn't, and while she still wishes Hillary were president (and takes great pride in the Hillary for President sign Politica got her, which hangs by her bed), CG loves seeing photos of girls with the President. (And, she'll tell you, it's a good thing Obama got elected, because John McCain didn't want pets to go to the vet. So she's supportive of the new administration.)

CG loves to see Sasha and Malia in the news, and she's been particularly interested in learning about what the Obama family is like. We've been in the habit of playing apples and onions at dinner (where each of us thinks back on the day and says one apple (something that made us happy) and one onion (something that was not-so-happy in the day)). I read somewhere that the Obamas do that, too, although they call it roses and thorns. So now, often as not, we play roses and thorns, as well. Sasha and Malia make their own beds, she learned. So now she wants to make her bed in the morning (usually with help, but hey, it's a start, and CG is a small girl with a big bed). She was excited to learn that Sasha and Malia have alarm clocks, because she has one, too! Now all that's left is for Woman of Many Talents, who lives in DC after all, to make friends with the Obamas and arrange a playdate.

In the meantime, CG is enjoying getting her Obama fix through the young reader's edition of Obama: The Historic Journey, published by the New York Times (a free copy of which came to me via Mother Talk). It opens with a short chapter on election day (in which it's reported that Malia's question upon learning that her father would run for President was, "Shouldn't you be vice-president first?"), and then cuts back to two chapters about Obama's childhood and early political career, and then four chapters cover the election through inauguration. The text is designed for young readers (older elementary school); CG treats it as a picture book, and goes through hunting for her favorites. What does she like, you wonder? The photo of Obama in the water in Hawaii; Barack and Michelle's wedding photo, because they're fancy; pictures of Michelle on inauguration day (because she was fancy); any photo of Sasha and Malia; the photo of Hillary and Obama. What CG would have had the Times leave out: any photo containing McCain or Bush.

The photos are stellar, drawn as they are from the Times coverage. The Obamas are a photogenic bunch! (If you're interested in photos, check out Callie Shell's photoessays, and fans of Michelle Obama's fashion have probably already found Mrs. O, which I confess to looking at every now and again even though I think the focus on Michelle's fashion is a bit OTT. But beautiful.)

So, need a way to encourage your kid to make her bed? I know at least one of my friends has a kid who likes to pretend to be an Obama girl. Whether you've got kids interested in the kids in the White House, or you just want a beautiful photo tour of the campaign, it's a good read. Available, no doubt, at your local public library, your local independent bookstore, or Amazon.

I kind of love this. My girl loves Obama, but isn't clued in to his girls. We will change that.

I bought this for our coffee table as soon as it was published. And we are not a coffee-table book family (b/c of all the other clutter). I can report that second-graders are interested in the text, too.

Oooh, I want this book!

You can see how these rumors get started: CG wanted to know why we didn't want to vote for John McCain, and we explained that both Obama and Hillary had ideas we liked, and that McCain had ideas we didn't like. The example we gave was that we thought the Democratic approaches to health care reform would make it easier for more kids to go to the doctors when they need to (that was an example she could relate to). Then, in kindergarten, all the kids did a journal entry on "what I would do if I were president" and CG's journal was "Make sure all pets could go to the vet." Somehow, her journal and our explanation got conflated, and it turned into "John McCain doesn't want pets to go to the vet."